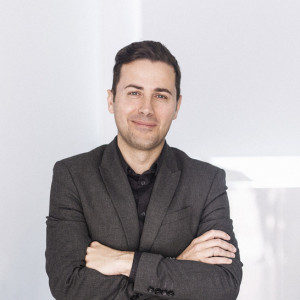 His studio, Fran Silvestre Arquitectos, was founded in 2005 and has the collaboration in Alfaro Hofmann's projects in Interior Design. He has also collaborated with international studies, highlighting the collaboration with the Pritzker Álvaro Siza Prize.

He has received first national and international awards such as the German Design Award 2019 (Frankfurt), the XIII Spanish Biennial of Architecture and Urbanism 2016 (Granada), the Red Dot Design Award 2013 (Essen), the IFCC Awards 2016 (New York) , or the National Competition Fundación Caja de Arquitectos (Barcelona), among others.

In addition, he has been invited to present his work in numerous seminars and conferences at universities and international institutions, including Kansas State University, New York AIA or Virginia Tech. He has also exhibited in various museums and art and design galleries at national and international level, such as the Serralves Museum within the framework of Inovdesign, or MoMA through the collective On-Site exhibition.

His projects are spread all over the world, highlighting places such as China, the United States, Brazil, Croatia or Spain, and have been published in international architecture and interior design magazines. Among them, Architectural Record, GA Houses, On Diseño or Interni. Also in publishers such as Phaidon, Taschen, Thames & Hudson or GG. Likewise, several monographs have been published that collect much of the study's work, such as those carried out by TC Cuadernos, A.Mag or Arianuova.