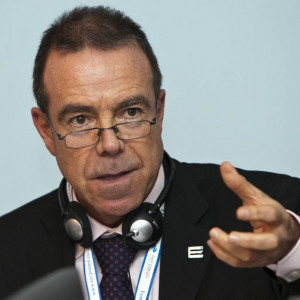 Founder, European Institute for Design and Disability (EIDD), Ambassador, Design for All Europe

Pete Kercher followed up a law degree from Southampton University with a period in international youth politics (Vice-President, European Federation of Liberal and Radical Youth, 1975-77). Moving to Italy in 1978, he established a communications and design consulting agency in Italy in 1978, now KSDC Strategic Design and Communications.

Executive Officer of the Bureau of European Designers Associations (BEDA) in 1988-94, he then represented Italy on its Board of Directors until 2002.
A member of ADI, the Italian Association for the Industrial Design, since 1994, he co-ordinated its International Committee in 1999-2001 and the Italian National Council of Design in 2000-2001.

A founder member of EIDD – Design for All Europe in 1993 (President in 2003-7) and of its national counterpart Design for All Italy (President 1997-99), he has served as EIDD’s roving Ambassador since 2007, speaking and lecturing in an average of 10 countries worldwide every year.

A member of several scientific, consulting and editorial committees and juries for international conferences, journals and awards and author of numerous articles and manifestos for political, legal and design publications, he served as a member of the Group of Experts in Design at the Office for the Harmonisation of the Internal Market (OHIM) throughout its existence (2002-2008).

A convinced believer in applying design methods to the strategic challenges generated by today’s complex and continuously changing society, so as to trigger interdisciplinary cross-fertilisation and synergy, he has written articles and manifestos for political, legal and design publications, chaired and addressed conferences, seminars and symposia all over Europe and the rest of the world and acted as consultant to several international projects. In 2010-2013, he was a member of the Advisory Committee of Design Silesia, a project run by the Region of Silesia, in Poland, whose aim was to use design and design methods to revitalise an ex-industrial region.

As President of EIDD, he focused on critical mass in terms of membership (the countries with active official member organisations increased from four to fifteen in the four years and have increased further to twenty-three since then), of academic credibility (the definitive EIDD Stockholm Declaration© was drafted and passed in 2004) and of taking the message about Design for All out into the real world of business and public administration, both by targeting the European Commission, other international agencies and major international organisations operating in the private sector and by devising and launching a cycle of major annual conferences focusing on macrotopics, areas where design can make a real difference: Culture for All (2005), Work for All (2006), Tourism for All (2007) and the Cities for All cycle (since 2011).

The author of many articles in specialised magazines and other publications, he has conducted or contributed to round tables, conferences and congresses throughout Europe and in other parts of the globe about marketing, Design for All and the workspace. After proposing the EIDD global communications competition for posters, videos and guerrilla marketing campaigns about Design for All, which was organised in partnership with the Bologna Design Centre with the patronage of Icograda and launched at Torino World Design Capital in 2008. He was also instrumental in EIDD’s presence in the official agenda of Helsinki World Design Capital 2012, writing a preparatory editorial for the major daily newspaper Helsingin Sanomat and co-organising the Cities for All conference and travelling exhibition, whose three language versions (English, Serbian and Italian) visited 19 venues in Europe.

He drew up the blueprints for the Mobile Inclusive Design Museum in Serbia, launched in February 2010, the Silesian Mobile Design Container (since March 2012) and the Michal Ozmin Design for All Archive and Research Centre in Cieszyn, Poland (December 2010), which he serves as President of the Think Tank. Partnering with the Milan Chamber of Commerce special agency Promos for international design partnerships, he collaborated in strategic planning with the Association of Small and Medium-Sized Enterprises (Confartigianato) in the Italian province of Vicenza. In May 2011, he was appointed to the Policy Board of the Zamek Cieszyn (Centre for Research and Documentation of Material Culture and Design), in Poland.

Instrumental in organising the first-ever design content in a European Capital of Culture (Vilnius, 2009), he spearheads the understanding of design and strategic design as the interface between culture and return on investment both in Europe and at home in Italy, where he partners with Federculture, the national Confederation of Cultural Organisations, and is a member of the Research Committee of the high-level annual Ravello Lab, the think tank that works to develop cultural policy for Italy.

Currently involved in creating and executing strategic design projects, whose aim is to revitalise and strengthen opportunities for economic and social development in the private and public sectors in several European countries, he has taken a leading interest in Tourism for All since organising the first major international conference on the topic in the Milan Triennale in 2007 and recently (October 2014) authored the first draft of the Manifesto of Matera on universal accessibility to the cultural heritage. In this respect, he chaired a session in the UNTWO Conference on Accessible Tourism, held in the Republic of San Marino in October 2014, and was recently (2015) co-opted onto the Group of Experts in Accessible Tourism at the Italian Ministry of Cultural Activities and Heritage and of Tourism. In this respect, he is now engaged on a major interdenominational project with the Italian Episcopal Conference, the Italian Islamic Community and the Italian Jewish Community to combine the accessibility of some leading pilgrimage sites and routes with the development of deseasonalised sustainable tourism in the country and the agenda for peace and understanding between the denominations and between Italians and migrant communities.

Since 2013, he has been teaching Design for All and Strategic Design for Audience Development in the International Masters Course in Arts Management in the Istituto Europeo di Design, in Rome. He has run many workshops in these and related fields in schools and universities all over Europe. In 2016 and 2017, he co-chaired the International Design for Inclusion academic conference, in the framework of the AHFE Conference (Applied Human Factors and Ergonomics).

In 2018, he was appointed mentor of the five-year Design Programme at Kaunas European Capital of Culture 2022.

He has worked with national, regional and local governments in several European countries, advising on design strategies for social inclusion, urban development and alternative models of economic prosperity. In this respect, he is a regular speaker at the European Economic Congress, held annually in Katowice, Poland, and at many other events held in the same country and related to design, the economy and revitalisation.